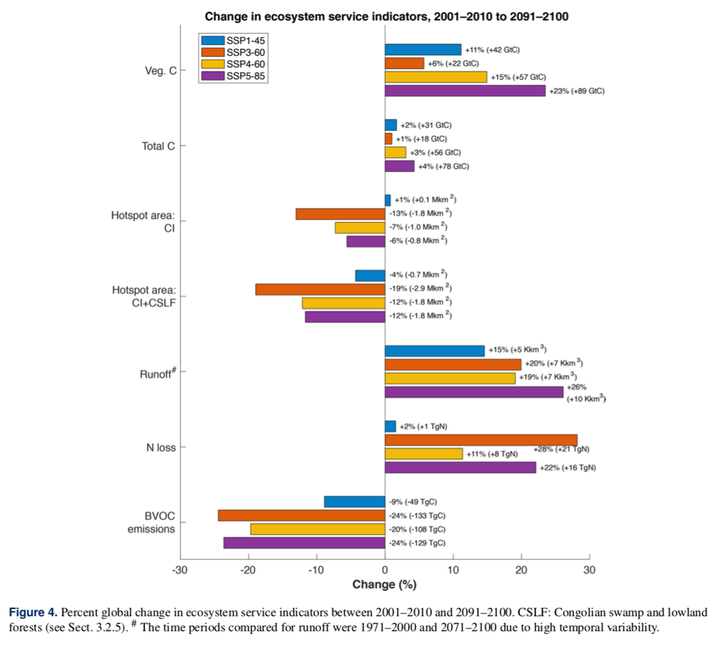 A future of increasing atmospheric carbon dioxide concentrations, changing climate, growing human populations, and shifting socioeconomic conditions means that the global agricultural system will need to adapt in order to feed the world. These changes will affect not only agricultural land but terrestrial ecosystems in general. Here, we use the coupled land use and vegetation model LandSyMM (Land System Modular Model) to quantify future land use change (LUC) and resulting impacts on ecosystem service indicators relating to carbon sequestration, runoff, biodiversity, and nitrogen pollution. We additionally hold certain variables, such as climate or land use, constant to assess the relative contribution of different drivers to the projected impacts. Some ecosystem services depend critically on land use and management: for example, carbon storage, the gain in which is more than 2.5 times higher in a low-LUC scenario (Shared Socioeconomic Pathway 4 and Representative Concentration Pathway 6.0; SSP4-60) than a high-LUC one with the same carbon dioxide and climate trajectory (SSP3-60). Other trends are mostly dominated by the direct effects of climate change and carbon dioxide increase. For example, in those two scenarios, extreme high monthly runoff increases across 54% and 53% of land, respectively, with a mean increase of 23% in both. Scenarios in which climate change mitigation is more difficult (SSPs 3 and 5) have the strongest impacts on ecosystem service indicators, such as a loss of 13%–19% of land in biodiversity hotspots and a 28% increase in nitrogen pollution. Evaluating a suite of ecosystem service indicators across scenarios enables the identification of tradeoffs and co-benefits associated with different climate change mitigation and adaptation strategies and socioeconomic developments.