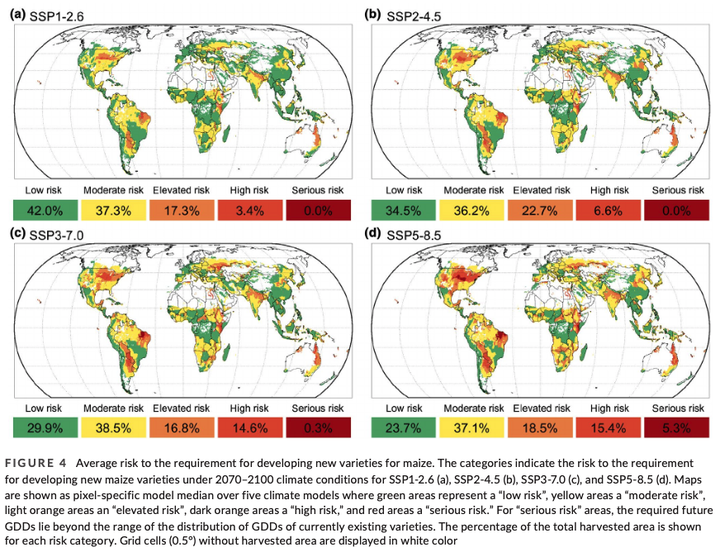 Climate change affects global agricultural production and threatens food security. Faster phenological development of crops due to climate warming is one of the main drivers for potential future yield reductions. To counter the effect of faster maturity, adapted varieties would require more heat units to regain the previous growing period length. In this study, we investigate the effects of variety adaptation on global caloric production under four different future climate change scenarios for maize, rice, soybean, and wheat. Thereby, we empirically identify areas that could require new varieties and areas where variety adaptation could be achieved by shifting existing varieties into new regions. The study uses an ensemble of seven global gridded crop models and five CMIP6 climate models. We found that 39% (SSP5-8.5) of global cropland could require new crop varieties to avoid yield loss from climate change by the end of the century. At low levels of warming (SSP1-2.6), 85% of currently cultivated land can draw from existing varieties to shift within an agro-ecological zone for adaptation. The assumptions on available varieties for adaptation have major impacts on the effectiveness of variety adaptation, which could more than half in SSP5-8.5. The results highlight that region-specific breeding efforts are required to allow for a successful adaptation to climate change.